living in the shadow of orthodoxy

Posted on September 1, 2014 by dougjohns

We knew little of Orthodoxy until we started spending time in Romania. The churches dominate the landscape, both rural and urban. Still, in parts of the country, and in museums, one can view the famous wooden Orthodox Church buildings with incredible paintings both inside and out. Inside, every inch of wall space and ceiling is covered in gold and icons. The saints look down on all who enter. The saints are kissed. The saints are knelt before. The Priest will pray for people out of his prayer book when he appears from the special room through the special door that is just for him. He is held in high regard. People of all ages still cross themselves every time they pass the church, whether on the bus, on foot or in the car. We must make it clear that we have had good conversations with a few priests, and we were able to witness an impressive special dedication ceremony of recently discovered historic icons. The choir of Priests sang at this service, and the music was incredibly stirring. It seems, though this is difficult to describe or verify, that there is a degree of fear, control, and perhaps superstition on the part of the common people. It is not our place to judge another’s spirituality, but sometimes tradition and ceremony can get in the way of a vibrant living faith in, and walk with, Jesus. Sometimes the rules and customs get in the way of receiving the forgiveness that comes when the step of faith is taken to personally trust in Christ. Our opinion, which is surely biased and that of an outsider, is that part of Romania’s darkness is due to the oppression of Communism and part is still due to the ‘shadow’ of Orthodoxy. The history of Orthodoxy is complex and its liturgy rich in symbolism. Look for future blog posts on BarnabasBridge that will speak to the history and theology of the Eastern Orthodox Church. Andrew Louth wrote Introducing Orthodox Theology in 2013 (Inter Varsity Press Academic) – it is a fair presentation and a great help to those wanting to know more. Our fear is, and this can happen in Protestant/Evangelical Churches too, that many can get ‘locked into’ a system without fully understanding what everything in the system stands for. Many have warned, no matter what expression of Christianity one finds themselves in, that all religion can be ‘dead’. So be careful. Embrace the One who is “the way, the truth, the Life” – don’t embrace the ‘package’, the ‘wrapping’. All this to say, with almost 90% of the Romanian people claiming Orthodoxy as their religion, there is plenty of opportunity for evangelism. Yvonne and I are happy to have a small part in encouraging those who take on the job.

As we seek encouragement and confirmation in our obedience to God’s call to this work, please read about why our Barnabas Bridge August campaign is so important by clicking here https://barnabasbridge.net/31-08-14-campaign/ 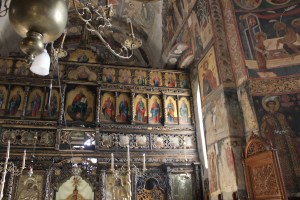 In 2016 Doug Johns retired from ministry in Canada to devote more time to international work and travel. He is a graduate of York Univ. (B.A.) and Gordon-Conwell Theological Seminary (M.Div.). Doug is married to Yvonne and they live in Creston, BC. They have four grown children plus eight grandchildren. Doug is a serious runner. Combined with an insatiable passion for geography from his youth, running races around the world has become a gateway for adventure. Doug started distance running at age 60. He has worked, studied, traveled, and run internationally.
View all posts by dougjohns →
This entry was posted in orthodoxy. Bookmark the permalink.
%d bloggers like this: