Never underestimate the influence of a Romanian church or the Romanian people. The people of the Hungarian reformed congregation would rather take on the Communist Dictator than let their beloved pastor be taken away from them. The late Charles Colson, in his book about church life, The Body, features the story of brutal dictator Nicolae Ceausescu, and faithful pastor Laszlo Tokes. From 1987, Tokes quickly gained immense popularity – a very real threat to the establishment. Faith had given Tokes eyes to see what could happen when the church understood its identity, when the people stopped thinking of their faith as just a Sunday morning ritual and understood that the church was the community of the people of God that could infiltrate the world. But the growing vibrant church was unnerving to Communist leaders. They threatened members of Tokes’ church, and parishioners had to run a gauntlet of secret police just to enter the building each Sunday. Once the service began, agents would stand in front of the church cradling machine guns in their arms or dangling handcuffs in front of them. Merely attending church services became a silent act of protest. Meanwhile, Tokes was denied his ration book; without it he was unable to buy bread, fuel, or meat. Then Tokes himself was attacked. Four men, their faces concealed behind ski masks, burst into the pastor’s small apartment in the church building. Laszlo and Edith happened to have visitors that evening, who helped them fight off the attackers with chairs. The assailants ran away, leaving Tokes bleeding from a knife wound in the face. Soon after the secret police must have concluded that killing Tokes would simply make him a martyr. Instead, they would render him ineffective by exiling him to a small, remote village outside of Timisoara. A court ordered his eviction from his home and church, setting the date for December 15, 1989. On December 15, 1989, the secret police came to take Laszlo and Edith. They brought a moving van for the Tokes family’s belongings, but they never got to load the truck. For massed protectively around the entrance to the church building stood a human shield. Heeding their pastor’s call, members of the congregation had come to protest his removal. The extraordinary demonstration continued throughout that night and into the following day. Then, late in the afternoon, the people took the protest a step further. For the first time in their lives, Romanians shouted their secret dreams aloud: “Liberty! Freedom!” Before dawn of December 17, the secret police finally made their move and broke through the people. Laszlo and Edith took refuge in the church sanctuary near the Communion table. Police beat Tokes until his face was bloody. Then they took him and Edith away into the night. With their pastor gone, the crowds moved from the Hungarian Reformed Church to the central square of Timisoara. Savage police gunfire claimed hundreds of victims, but the people of Timisoara stood strong. By Christmas 1989, the world reeled with the results of that stand: Romania was free and Ceausescu was gone. The pictures below show the church where it all started. It was amazing to tour this church. Wow!

Please read about why our Barnabas Bridge August campaign is so important by clicking here https://barnabasbridge.net/31-08-14-campaign/ 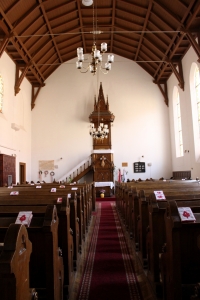 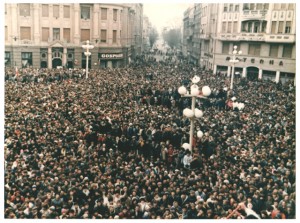 In 2016 Doug Johns retired from ministry in Canada to devote more time to international work and travel. He is a graduate of York Univ. (B.A.) and Gordon-Conwell Theological Seminary (M.Div.). Doug is married to Yvonne and they live in Creston, BC. They have four grown children plus eight grandchildren. Doug is a serious runner. Combined with an insatiable passion for geography from his youth, running races around the world has become a gateway for adventure. Doug started distance running at age 60. He has worked, studied, traveled, and run internationally.
View all posts by dougjohns →
This entry was posted in Uncategorized and tagged Lazlo Tokes, Romania Revolution, Timisoara. Bookmark the permalink.
Loading Comments...