The statue of Johannes Honterus stands outside the famous “Black Church” in Brasov. Born in Transylvania, and while studying in Austria & Germany, he was won over to Lutheran reform. There was a large German/Saxon population in Transylvania, so upon his return home it was quite natural for Honterus to quickly and efficiently bring about religious and educational reform in Brasov. And thus the Protestant Reformation moved into Eastern Europe. Here his right hand points directly across the courtyard to the school he founded in 1541. The school is still in operation, with German language instruction. Students from all over Romania attend the school. This school holds the oldest school charter in the country. Honterus also made provision for a Hungarian pastor to be employed by the church to serve the large Hungarian population in the area. The Black Church is the largest ecclesiastical building in Romania, with the largest mechanical organ in Romania (4,000 pipes) and the largest swinging bell in Romania (6,000 kg). The church and Honterus provide an interesting study in how Catholic Germans and Hungarians converted to Lutheran belief so quickly and easily. 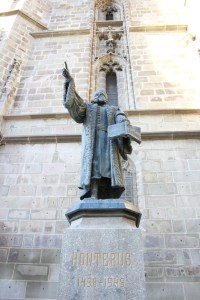 In 2016 Doug Johns retired from ministry in Canada to devote more time to international work and travel. He is a graduate of York Univ. (B.A.) and Gordon-Conwell Theological Seminary (M.Div.). Doug is married to Yvonne and they live in Creston, BC. They have four grown children plus eight grandchildren. Doug is a serious runner. Combined with an insatiable passion for geography from his youth, running races around the world has become a gateway for adventure. Doug started distance running at age 60. He has worked, studied, traveled, and run internationally.
View all posts by dougjohns →
This entry was posted in Uncategorized and tagged Black Church, Brasov, Honterus, Romania. Bookmark the permalink.
Loading Comments...